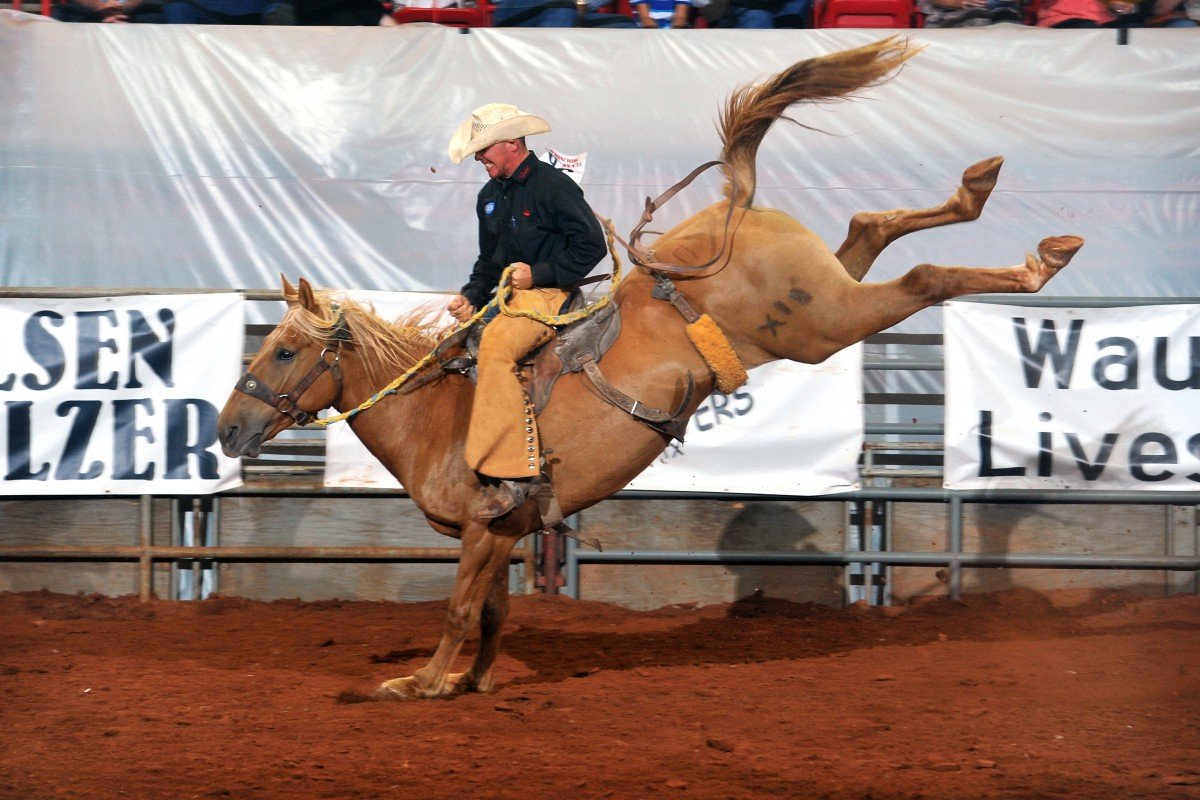 RANCH BRONC RIDING “Ride as ride can” for eight seconds.  A standard working saddle must be used, no P.R.C.A. rigging  allowed.  A regular bucking horse leather halter must be used.  No hackamores.

CALF DOCTORING  Mounted 4-man team.  Cutter cuts numbered calf from herd prior to heading and heeling by any of the team members.  There is a 4-loop limit.  All but correctly numbered calf and one other calf must be returned to herd prior to roping.  Non-ropers must dismount and remove ropes from calf to stop time.  It is acceptable to have head and forefoot roped as long as calf is standing when heeled.  Any team member may cross the line, but no more than one member can be in the herd at any given time.  A calf must be running loose (may be trailing a rope) prior to being headed.  The calf’s body must hit the ground prior to removing ropes, but doesn’t have to be down when ropes are removed. 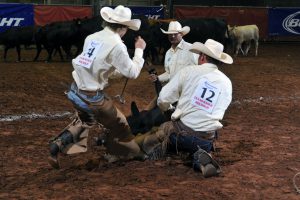 TEAM BRANDING  Two ranches will compete at the same time on opposite sides of the arena.  A seven-man team, including a roper, two flankers, a brandr andthree herd holders who can cross the line.  Calves may be branded on either rib cage.  Thirty head of calves are held behind a line 40 feet from the end of the arena.  The roper approaches the calves on horseback, and when he crosses the line, the time begins.  He will have  two minutes to drag two calves, allowing all the loops he needs, and without his horse breaking a trot.  Three herd holders have been added to the team.  The roper cannot rope outside of the line.  The two “flankers” must not touch the calf until it has been drawn across the line. (15 second penalty)  After the calf is flat on its side and the rope is removed, the branding iron is removed from the bucket, the calf is branded on one side (15 sec penalty for branding elsewhere), and the iron is returned to the bucket.  The winner is the fastest time on two calves.  A thirty-second penalty will be assessed for the horse moving out (loping.)  Limit: two calves in two minutes.

TEAM PENNING  A four-man team of riders approaches a line drawn across the arena some forty feet from the north end.  Behind the line, numbered calves are waiting in a herd.  Time begins when the first rider crosses the line.  Without loping into the herd, the team has three minutes to cut the three head of calves bearing designated numbers, then move them across the line and, finally, pen them in the portable pens at the south end of the arena.  No more than three calves may be penned.  The team with the fastest time and most correctly numbered calves penned, wins.  A wrong numbered calf may enter the pen, but if time is called with the wrong numbered calf in pen, “no time” will be awarded. 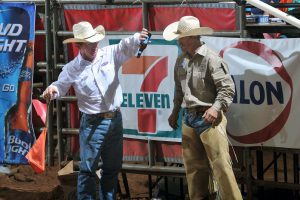 WILD COW MILKING  A four-man team including a roper, a milker and two muggers will compete with all members being on horseback.  The cow is released from the chute and pursued by all members.  Any team member may rope.    The cow’s head or horns must pass through the loop.  The roper must dally- lap and tap – no intentional tripping.  THERE IS A TWO LOOP LIMIT.  The rope must be completely off the horse before the milking commences and off the cow before being flagged.  The team must attempt to milk the cow at the spot she is roped.  (30 second penalty for violation) Keep the rope attached to horn until muggers get hold, then drop the rope.   The “muggers” hold the cow with help from the roper, while the milker milks her into a standard 12-ounce longneck bottle.  The milker runs to the judge at the other end of the arena and gives him the bottle.  If the milk will not pour, the team is disqualified.  The team with the fastest time wins.

*In all events, there will be only one rope per horse, and no transferring of rope from horse to horse.  A lost rope in any event is a spent rope; teammates cannot pick it up for the roper.  There will be a 15-second penalty for a rope left on an unmounted horse in a dangerous manner. (This will be Judge’s discretion)